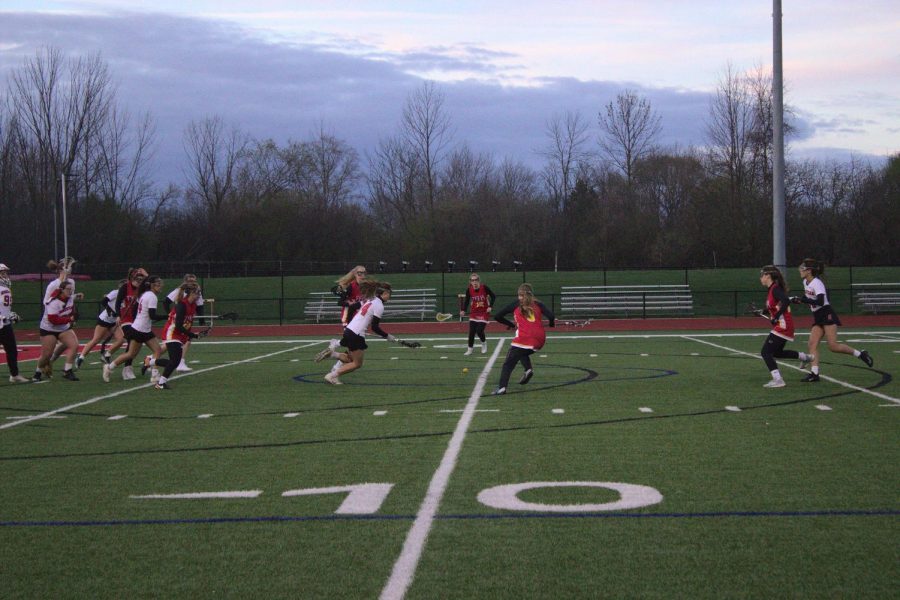 Theadora Krueger, senior, chases after a loose ball on the field.

The Lady Highlanders met their match against the Divine Savior Holy Angels (DSHA) in the girls’ first home lacrosse game of the season on April 19 and ultimately suffered their first loss of the year.

Coming off a strong win against Arrowhead High School on Friday, April 16, the girls tried to keep their momentum coming into Monday’s home game. “Overall our goal going into the game was to play together, keep our energy and have fun on the field,” Claire Baden, senior attack, said.

The Dashers proved to be a tough match, scoring two goals within the first 10 minutes, putting Homestead’s defense on their toes. “It was definitely a challenge and we had to put forth our best effort against [DSHA],” Isabella Brooks, senior defender, said. As the score reached 4-0, the Highlanders knew they had to get points on the board.

“I had a free-position shot, but the angle was pretty bad. Since all of the defenders assumed I was shooting, they crashed in on me, leaving Avery open. I knew that if I gave it to her, she would have an open shot with a much better angle than I had,” Annie Brown, junior, attack, said. Brown threw a swift pass to Avery Bersell, senior midfielder, who scored Homestead’s first goal on their home turf and brought the score to 4-1.

With nine minutes left in the second quarter Homestead’s defense caused a loose ball and an opportunity for a critical turnover. Davenport University commit and defensive midfielder, Theadora Krueger, senior, picked up the ball and made a 70-yard breakaway down the field.
“Scoring on a full field breakaway is my favorite play of all time. Nothing beats a great turnover on defense, running it down, and tipping a shot on goal,” Krueger said, “Those kinds of goals keep me going during the games no matter what the score.”

Adding three more goals under their belts, DSHA brought the score to 7-2 at halftime, but the Lady Highlanders headed to the locker room with their heads held high despite the scoreboard.

Starting off the second half strong, Krueger came out to score her second, and Homestead’s third, goal of the game. Homestead was closing in on the gap with a score of 7-3.

However, this lead did not last too long as the Dashers broke away and scored four more goals. While Homestead struggled to complete passes down the field, Krueger whipped in one last goal for the team as the score reached 11-4.

With a final score of 12-4, Homestead cheered as their girls came off the field, celebrating the hard fought game. “Each game we play as a team allows us to build off our mistakes and look forward. The team has great talent, so if we can work together and communicate on both sides of the field the team can make some great strides looking further into the season,” Krueger said.

The home game marked the first of many for the Lady Highlanders who are excited to watch the young team grow throughout the season. “I am looking forward to the many more games to come and growing as a team this season,” Bersell said.

The girls lacrosse team is heading to Franklin on Wednesday, April 21 to match up against the Sabers.