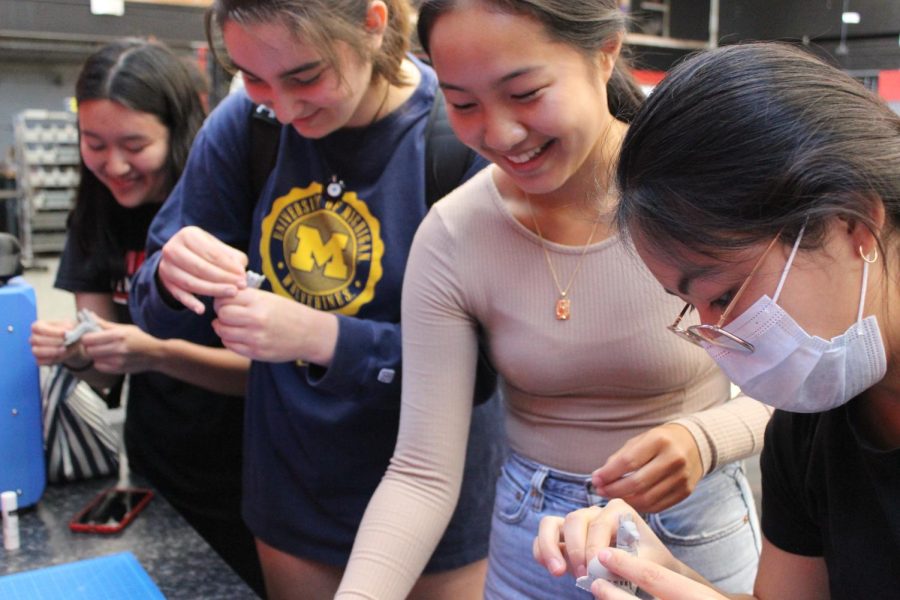 Once upon a time in a Coloradan sixth grade classroom 1,279 miles away, 28 pairs of eyes stared up at a smartboard screen in awe. The students were in the infancy of a new project: 3D-printed prosthetics for stuffed animals. Their goal was so specialized that their teacher searched for mentors with expertise in the niche area. Those mentors were found in Rebecca Yang, Sarah Li, Olivia Kleyman and Sophia Ho, four Homestead seniors with extensive experience in utilizing their elevated science, technology, engineering and math skills to conduct unique acts of service.

It all started when Kleyman got an email from a friend she met through her work with UNICEF USA. As president of Homestead’s UNICEF chapter, Kleyman has fostered connections with energized student leaders around the country, and this specific one was reaching out on behalf of a program called Makers for Change.

The goal of the international nonprofit organization is to “increase equitable access to advanced technologies in order to support community engagement.” This summer they searched for high school and college students to join their program, and Kleyman was eager to take advantage of the opportunity.

“When I first heard about high school students being able to 3D print anything useful, I honestly didn’t believe it, but it excited me,” Kleyman said. “I had little to no experience with printing, so I reached out to some of my friends that I knew were skilled in math and STEM and submitted to Makers for Change.”

After the team’s application was accepted, they chose the animal prosthetics track to focus on out of all of the projects that Makers for Change offers. In order to prepare for the task that lay before them, the girls spent the summer developing their understanding of CAD (computer-aided design), software that was essential to execute their project.

“The program provided us with tons of resources and training sessions with mentors that had experience,” Kleyman said. “ To practice, we would take random everyday objects, like a straw or a toothbrush, and try designing them with CAD until we felt ready.”

Once the group was comfortable with the printer they got down to business, diligently reaching out to local shelters in search of an animal that they could assist only to be turned away by every shelter in Ozaukee County.

The team wasn’t phased by the rejection, instead opting to maintain a positive mindset. “It was challenging, but we knew that the only thing we could do when we encountered challenges was to pause, reevaluate, and try again,” Ho said.

The girls pivoted to a different track that was a better fit for them: 3D printed toys. “Olivia reached out to a children’s hospital in the area and asked if we could make toys for them and they eagerly agreed,” Li said.

With Yang manning the 3D printer, Ho and Li sanding and decorating the figures, and Kleyman maintaining contact with the hospital, the team was able to create over 55 toys for children to find solace in through art therapy.

Amidst the team’s success, Yang remained dedicated to their initial project and continued to hunt for shelters in need of help. “I kept emailing shelters and rescues in order to fulfill the goals of the animal prosthetics track and eventually struck gold with the Neenah Animal Shelter,” Yang said.

A foster kitten named Eagle struggled with Cerebellar Hypoplasia, a neurological condition that affected his ability to move and walk normally. Shelby, the lead behavior specialist at the shelter who also serves as Eagles foster mother, asked the girls if they were able to create a feeding station that would provide stability for the cat and the team accepted the new mission and went back to the thrilling position of square one.

“Our first designs of the stand were messily scribbled out on a legal pad in the Home Depot,” Ho said. The girls were able to develop a more sophisticated version of their idea over time by sketching countless prototypes of the feeder until a solid version was conceived and ready to serve as their blueprint.

Eagle’s feeder proved itself to be a more challenging piece for the 3D printer to construct when the team was swiftly met with dozens of failed prints. “Sometimes the beginning of the print would go smoothly, but then somehow the extruder would stop working and everything would turn into a mess of plastic spaghetti,” Yang said.

These faulty attempts prompted several trips back to the drawing board for brainstorming, but the team remained steadfast in their commitment to the project and Eagle’s quality of life.

Throughout the girls’ journey, Jeff Patterson, AP Physics and PLTW teacher, served as an advisor and knowledgeable resource. “Mr. Patterson was very generous about letting us use the 3D printer in the lab along with being supportive and curious about our projects,” Yang said. “He was also a lifesaver in just keeping an eye on the prints and letting me know if any failed, before graciously restarting them himself.”

After weeks of recalculations, scribbled-out sketches and accidental pasta prints, the team finalized their stand and Eagle is now able to safely rest without potentially harming himself.

As one of 21 Makers for Change teams around the world, the girls were able to serve their community with their combined skills and shared sense of purpose. Yang was even approached by one of the program’s executives and selected to lead the animal prosthetics track during the next program year because of her demonstrated talent.

“In school, it’s rare to have the chance to apply knowledge in real-world situations,” Ho said. “For me, Makers for Change has reminded me that scientists don’t just study science for the sake of information but also to help others.”