From Auditions to Standing Ovations: How Cinderella Came to Be 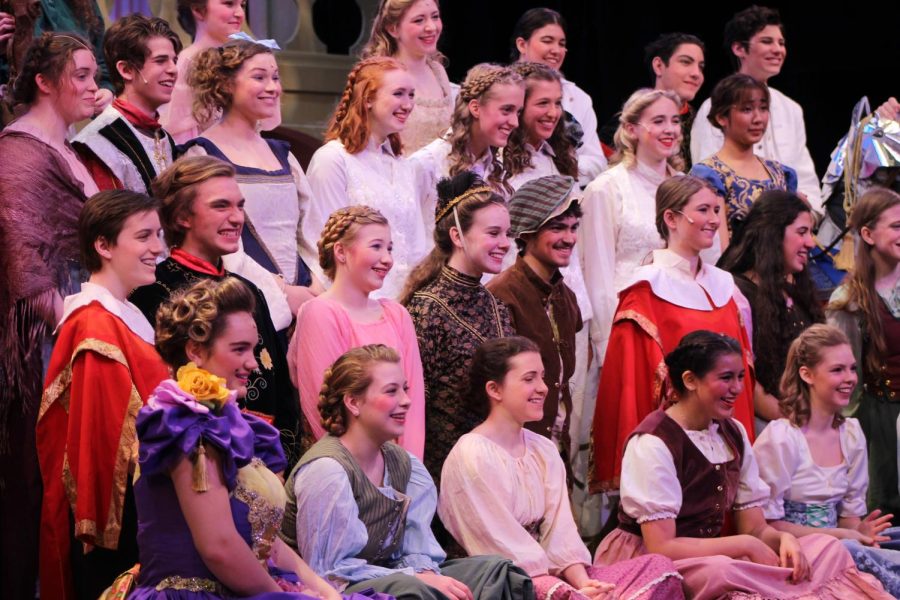 When the clock struck 3 p.m. on Nov. 15, 2021 the fine arts wing was flooded with students excited to audition for the winter musical. In the 13 weeks that followed, the group transformed into a refined ensemble of performers that would present a show that ultimately represented the opening words of the show’s prologue: Bizarre, improbable and pretty.

For her first show back after maternity leave, Amelia Figg-Franzoi, director and choreographer, searched for a musical that contrasted the contemporary nature of the department’s previous musicals like Little
Women, Big Fish, and Shrek. “I wanted to get back to the classics, and Rodger and Hammerstein is the definition of classic,” Figg-Franzoi said.

“I was really excited because the story is so well known, but this adaptation of it has some interesting twists and turns,” Vivian Reiland, sophomore, said.

When the show was announced on the drama department’s Instagram, students flooded the post with comments like “Woooooo!” “Can’t wait!” and “YESSSS,” the auditions contained a similar sense of excitement.

One by one all of the hopeful performers stepped to the center of the semi-circle to perform monologues
from the show with their own acting choices and Figg-Franzoi’s decisions.

“She gives you a secondary way to act out your scene, and you never really know what it’s going to be so it challenges you as a performer,” Hannah Kendzor

senior, said. Some of the director’s interpretations had the actors perform as flamingos, roller-coaster riders and Angelina Cicero, English teacher.

After the callbacks were announced, the 14 actors selected were put to the test, showing off their waltzing abilities, pairing up in countless duos for chemistry reads and putting their personal twists on Hammerstein’s classic lyrics.

“We could have cast Cinderella five different ways,” Figg-Franzoi said. “We really focused on niching into who plays opposite well, who’s an upperclassman and who’s just there for the love of theater.”

When the clock struck 12:20 p.m. on Nov. 19, many of the performers were tightly packed into caravans traveling towards Camp Randall Stadium for the state football game when the cast list was finally revealed.

“I was in the car when I got a text from my friend saying that the cast list is out,” Amelia Eichmeier, junior, said about the moment she landed the role as the show’s leading lady. “I just started screaming so loudly that my friend that was driving us to the game almost swerved off of the side of the road.”

The announcement transformed what was already an exciting day for Homestead students into a particularly thrilling one for the members of the fine arts department and sparked the commencement of the show’s 13-week magical journey.

musicians signed up to be a part of the pit orchestra in Homestead’s history. “A lot of kids were really hungry to get whatever musical opportunities that they could after two years of them being so limited,” Paul Oestreich, music director, said.

During the orchestra’s first rehearsal there was a concern that cuts would have to be made to the group in order to accommodate them all into the tight, dark space but all 33 of them were ultimately able to find their place. “I love music and I wish that I’d done pit orchestra in the past, but I was playing hockey at the time,” Jack Gerew, senior, said. “It was really amazing to get to learn so many challenging songs.”

Eager hands outstretched themselves grabbing for scripts during the show’s initial full run-through that brought the cast list to life as the musical’s first “Herman!”s “Ridicule”s and “Fol-de-rol and fiddledy dee”s dropped from the actors’ mouths.

“It’s always very loud and very chaotic when everybody gets together, but the dynamic that we created so early in the game made the whole process really enjoyable,” Owen Weiss, junior, said.

The three weeks leading up to winter break included the cast spending dozens of hours in the choir room seated in chairs around Oestreich learning how to sing all of the right notes. Their work made it possible for the ensemble to get on their feet and pair the songs with music.

One day, as the cast reviewed choreography in the black box, Figg-Franzoi manipulated Eichemeir’s blonde tendrils while the actress stared into the glowing lights of the costume room’s mirrors. The show’s photoshoot day required Eichmeir to slip into a white ball gown and transform into the famed princess known around the globe. The girl couldn’t help but giggle as she attempted to pose while silhouetted in the auditorium’s spotlight with her glass slipper in hand.

“Getting into that dress really gave me the feeling of ‘oh my goodness, this thing is actually happening,” Eichmeir said.

The gravity of the show’s impending opening night began to weigh heavy upon the cast crew’s shoulders as the month of January came and went. “It naturally got a little bit stressful as the weeks went by,” Abigail Spitz junior, said. “They don’t call it Drama Club for nothing.”

During the rehearsal process, multiple performers were subjected to the confines of quarantine and had to watch the show come together from the 1920px by 1080px boxes of Zoom.

Ellie Bogaczyk, sophomore, led one of the show’s largest ensemble numbers “The prince is giving a ball” and was sent home due to COVID-19 several times; however, these setbacks did not deter her from becoming one of the show’s most standout performers as the dutiful Lord Pinkleton.

“It was really fun getting to adjust to a role that I normally wouldn’t cast myself in,” Bogaczyk said. “I got to do something in almost every scene and perform with a lot of the different ensemble members.”

The full extent of the show’s collaborative nature shined during its “Sitzprobe,” a showbiz tradition based on the German phrase ‘sit and sing’ where the full cast and pit orchestra came together in the choir room to run all of the show’s musical numbers in tandem for the very first time. “The Sitzprobe allows us to iron through issues that would be a lot more difficult to solve if we were all dolled up in costume in the auditorium,” Figg-Franzoi said.

On stage, the show blossomed as the cast and crew were fueled by the intensity of tech week. The laundry list of things to fix before the show opened was lengthy—four days before the audience filled the seats of the James Barr Auditorium there were giants falling from stilts, ball gowns ripping mid waltz and glass slippers hurling towards Mr. O’s grinning face. All of these elements motivated the cast to work faster, smarter, and harder to present the best show that they possibly could to the community.

“We all kind of go insane during tech because we can literally feel how close we are to actually doing what we do for an audience,” Sam Esteban, junior, said.

During this four-day period, the 700 wing buzzed with anticipation as the 116 person group of actors, musicians, crew members, costume designers and directors bonded over dum dum lollipops, 20-minute dinners catered by local restaurants, and the weekend of shows that lay ahead of them. “It’s honestly so much fun,” Gracyn Oelke, junior, said. “Tech week is my favorite week of the year.

Joined together hand-in-hand the cast announced triumphantly that “I’m going to do whatever I do with good energy!” as the clock struck 6:56 p.m. on opening night.

Figg-Franzoi threw her arms out at the eager, receptive cast that circled around her and exclaimed “The show is yours! Love it, trust it, trust yourselves, and just have fun out there because you deserve it!”

From the opening notes of the prologue and first movements of Ellis Westreich, freshman, and Alyssa Santoleri, junior’s, puppets, all of the care that the performers put into bringing Rodger and Hammerstein’s show into fruition was on full display.

As golden envelopes shot into the air with glee during “The Prince is Giving a Ball,” and rainbow-hued ballgowns swished to and fro to the tone of “10 minutes ago,” it was clear to all of the members of the audience that the drama department’s work was something with celebrating, and by rising to their feet and clapping along to the show’s exit march they did just that.

“It was the best high school musical that I’ve ever seen—and I’ve seen a lot of high school musicals,” Michael Richter, science teacher, said with the show’s program proudly displayed on his whiteboard. “I was really amazed by how much talent we had in the school and how well everybody involved with the production put it all together.