The Highlander Online • May 9, 2022 • https://homesteadhighlanderonline.com/37495/feature/first-drafts-to-finishing-touches/ 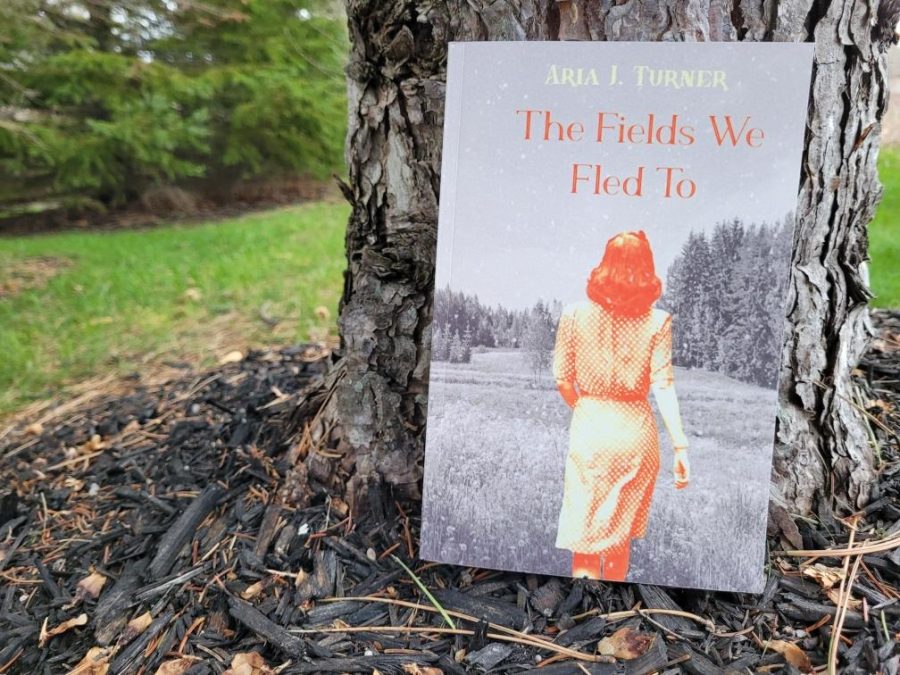 While writing her story, Santoleri also designed the cover of The Fields We Fled To.

Every day, authors all around the world work tirelessly to produce the most captivating stories for audiences who are constantly on the lookout for new reads. From drafting a story’s first couple of pages to finding a publisher willing to promote their finished product, the work of an author is never done.

Alyssa Santoleri, junior, experienced the tedious nature of the publishing process when she wrote and self-published her own book late last year.

Santoleri’s love for creative writing began when she was very young. “I’ve been writing since I can remember, anywhere from stapling a bunch of pages together and only using the first page to write about fairies to writing a picture book about a man on a train,” Santoleri said.

Words are impactful. This is a belief that drew Santoleri towards the paper and pen in the first place.

Santoleri said, “I enjoy the most eliciting a reaction out of people. Writing has so much power to get people to laugh, to cry, to smile, it’s the ability to make words mean more than just words that I enjoy the most.”

The creation of her first novel originated as a health class assignment requiring students to craft an internalized panic attack monologue; the trivial homework assignment eventually evolved into much more.

“I was a little uncomfortable having to write it,” Santoleri said. “So I did the only thing I considered logical at the time and wrote about three or four pages worth of a fictional story leading up to the anxiety attack, probably torturing my teacher by her having to grade it. But I thought about it afterward, and my mind started spinning ideas for what those couple of pages could be, and by ten o’clock that night I had it storyboarded.”

As Santoleri continued generating new ideas, the plot of the book developed into a tale following two kids fleeing Italy to the British countryside in order to escape the impending Italian civil war during the 1940s.

“I think the part of the book that I’m most proud of is the ending. Everything comes together in a hopeful outlook for the future, and our characters are finally not all the way okay, but on the path to recovery from the traumas and struggles of war,” Santoleri said.

Over the several months following the book’s inception, Santoleri made the most out of the free time the pandemic and online classes granted her by piecing together a fully fleshed out novel ready for publication.

Continuous rejection did not deter the young author from her ultimate goal. Santoleri said, “I started down the route of self-publishing and had to design my own cover, format and market myself before the release date.”

The work of self-releasing a book was foreign territory that came with its fair share of struggles.

“It’s a lot of figuring things out yourself when you have no clue where to start, and no one’s really gonna help you with it,” Santoleri said. “But the most difficult part was the formatting, trying to navigate Amazon’s formatting site, and trying to upload a book to preview which took at least forty minutes each time, only for my formatting to be an inch off and unable to publish it. It was a lot of frustration and a lot of dead ends. As well as the marketing process, which was a lot of trial and error. You have to do everything yourself, and though frustrating, it’s really rewarding afterward.”

After a year of unwavering dedication and many scrapped pages, the story was released to the public marking the first of what Santoleri hopes to be many more to come.

“After high school, I’m planning on going to college for creative writing and publishing, and I’m hoping to be able to be part of a publishing company as well as continue writing as a novelist,” Santoleri said.

Santoleri’s book, The Fields We Fled To is available for purchase here.