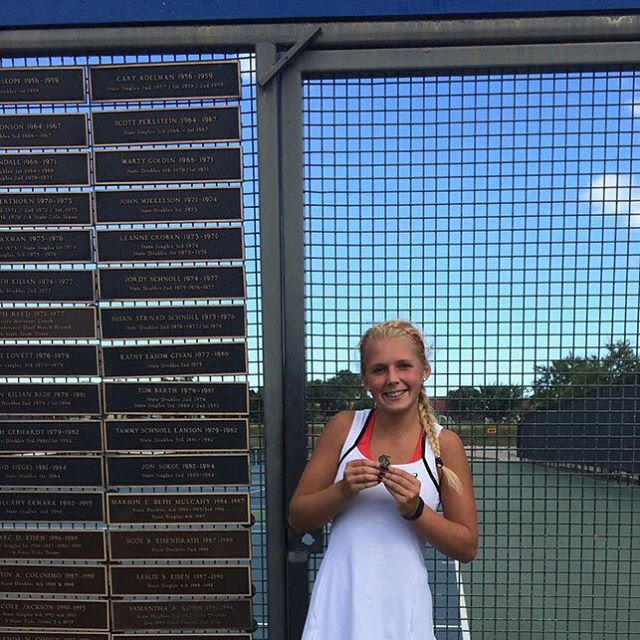 Mikhailenko poses for a picture after winning the singles Sweet Sixteen Championship.

Mikhailenko plays her heart out

“I began playing tennis at the late age of 12 and therefore have been playing for the past six years. Before then, I was on the Schroeder Swim Team and absolutely despised it. My mother, however, wouldn’t let me quit unless I had another sport in mind that I wanted to pursue. Picking tennis was honestly like picking a slip out of a hat; I’d taken classes through the Rec Department and liked it so I figured ‘Hey, why not.’

The first two years, I played just for fun. I attended practice about twice a week and played very recreationally. Unfortunately, or should I say fortunately, my mother, as a former intense athlete herself, wasn’t settling for this. She pulled me out of the current tennis classes I was in and plopped me into very competitive drills where I was by far the worst player. That is where I began to improve. Along with this, I began to travel at least twice a month around Wisconsin and Illinois to compete in United States Tennis Association (USTA) Tournaments.

Needless to say, my mother has served as a huge inspiration for me. She played competitive volleyball in Belarus, the country she grew up in, for twelve years (five in college and seven in grade-school); since she was on the best Junior Team in her country, she obtained the opportunity to travel around Eastern Europe to compete. All of her competitiveness, athleticism, and drive was passed down. Combine those qualities with her constant pushing to make me into a better athlete is a huge reason why I became the tennis player I am today.

The best memory I have of myself playing is easily this past fall high school tennis season, specifically, the final round of the Team State Championship against Neenah. As number one singles, I am the last player to go on because if each school has three wins (there’s a total of seven) it comes down to me. Since we matched up with Neenah well, that is what happened. As I played my very last high school tennis match, I realized this match would also determine whether or not Homestead won a state championship title. That type of feeling is indescribable. The crowd roars, adrenaline pumps through my body and I’m supposed to make my racket contact the tennis ball. Though this may have been the most stressful match of my life, the end result was the most rewarding: a team state championship my senior year. Watching my entire team, girls I had practically spent all of the last three months with, line up and receive their medals is a memory I’ll be telling my kids about.

The biggest challenge I’ve faced is having such a late start. Many of my tennis peers have been playing since they’ve been five or six years old. Although my skill level with these individuals may be the same, I still feel unconfident at times. Throughout my years I have possessed a lot of self-doubt; however, my great coaches have helped me overcome a lot of it. Overall, tennis is a beautiful sport. All of my siblings now play because of me. Since they began almost eight years before me, I expect to see them at the US Open soon. I am very thankful for the sport because it has given me another passion and another family.” (Katya Mikhailenko, senior)