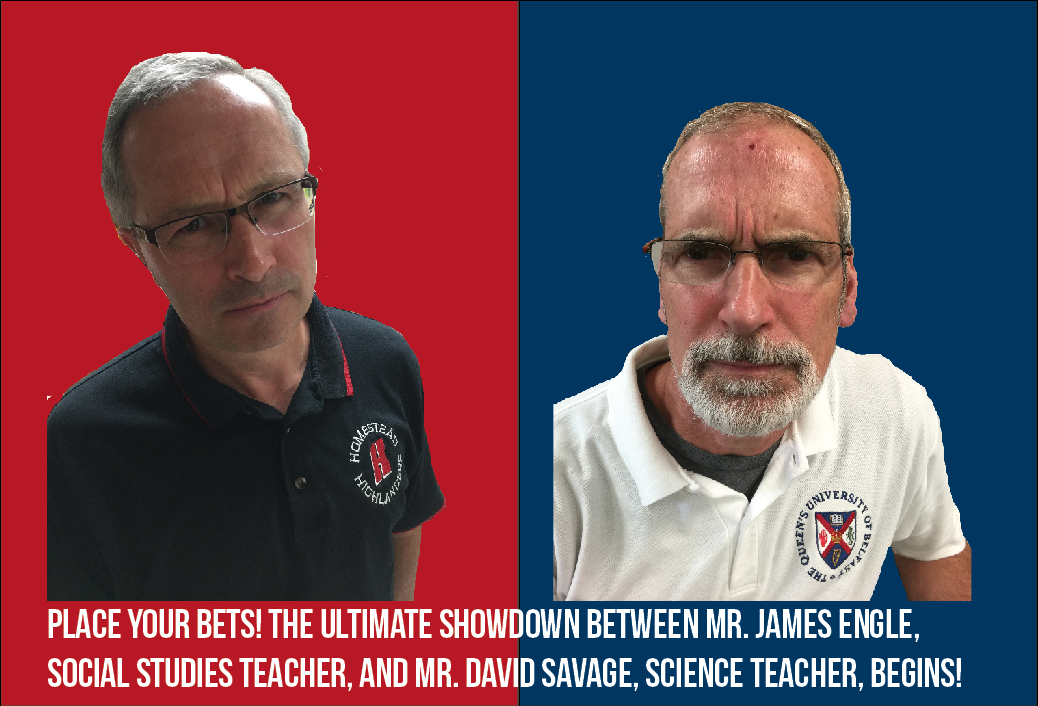 The Ultimate Showdown of Ultimate Destiny: Mr. James Engle and Mr. David Savage face off in a diss match

In the halls of Homestead, there is one battle that everyone knows. The newest freshmen whisper about the mythical rivalry in hushed, reverent tones, and the most seasoned of seniors spin tales about it with all of the adulation and glory reserved to the greatest of Greek epics. Because in the annals of Homestead history, in its most esteemed and sanctified lore, there are two giants who stand above the rest, locked in eternal conflict with one another to the ends of time: Mr. James Engle, social studies teacher, and Mr. David Savage, science teacher.

Their contentious relationship is well documented; in many of their classes, it is common to hear both of them either launching lyrical missiles at each other or embedding insulting references to one another in their lesson plans. Whether it’s having students drop balls onto a picture of Mr. Engle’s nose in the free-fall experiment or detailing many of Mr. Savage’s imaginary criminal escapades, these two enemies have always had it for each other, never having had the opportunity to settle their differences once and for all.

However, now, they have the chance. Preparing volumes of trash talk, stockpiling arsenals of insults and sculpting their game faces, Mr. Engle and Mr. Savage engage in their greatest battle yet: a diss match.

In a match consisting of 11 rounds, each of these two contestants will be asked a question, and whoever presented the better insult–a result that will be determined by Kia Pourmodheji, senior and impartial student judge–to the other in response to the question will receive the point. After the rounds are completed, the teacher with the most points wins the showdown and conquers the other once and for all!

1. Complete this sentence: Mr. Engle/Savage is…

Mr. Savage: Kind of like a slinky; not much use for anything, but kind of fun to watch when you push it down the stairs.

Pourmodheji’s Choice: Mr. Savage totally took that one out of the park.

Mr. Engle: Like that Sheldon Cooper guy from “The Big Bang Theory.”

Mr. Savage: A mixture of mostly unintelligent life forms: somewhat of a blend containing protozoa, bacteria, bread mold and a little primate mixed in for hair.

Mr. Savage: He looks, which is basically like colonies of fecal bacteria.

Mr. Engle: I have no idea. We never talk to one another.

Mr. Savage: A great deal of oxygen is being wasted.

Pourmodheji’s Choice: Mr. Savage, for sure.

Mr. Savage: His classroom is about as far away from my classroom as possible.

Pourmodheji’s Choice: Mr. Engle takes this one for keeping it classy.

6. If Mr. Engle/Savage went to jail, what would it be for?

Mr. Engle: Being an illegal immigrant.

Mr. Savage: It’d be more than likely for a repeat offense for his driving; note the multiple large dents on his car every year.

Pourmodheji’s Choice: Mr. Savage takes it once again, dealing a low blow with the car.

7. What do you think of Mr. Engle/Savage as a teacher?

Mr. Engle: I try not to think of him at all.

Mr. Savage: Is this a trick question? I didn’t know he actually was one.

8. What gameshow would Mr. Engle/Savage be good at and why?

Mr. Engle: You are suggesting that he would be good at something.

Pourmodheji’s Choice: Mr. Engle takes it for being blunt, concise and to the point.

Mr. Engle: Will anyone really care?

Pourmodheji’s Choice: Mr. Savage wins this one. What a way to make a reference.

10. What wouldn’t surprise you about Mr. Engle/Savage?

Mr. Engle: That he uses the leftover formaldehyde from the dissection jars as cologne.

Mr. Savage: That his children and grandchildren actually like him and are just putting on an act so as to not upset their mother and grandmother–who is a saint, by the way.

11. If you two were the last people on Earth, what would happen?

Mr. Engle: We would live on different continents.

Mr. Savage: Nothing. I would move to the other side of the Earth and wait a little while because he would soon be extinct. (I am pretty sure he does not know how to feed himself).

Pourmodheji’s Choice: Mr. Savage. What a good way to bring Engle down.

And with a score of 6-5, Mr. Savage wins the showdown!

Reveling in the vanquishment of his foe, Mr. Savage stated, “My victory in the diss-off serves as scientific proof that there is an exponentially larger number of things to make fun of Mr. Engle about than there are about me.”

A victory in the diss-off serves as scientific proof that there are an exponentially larger amount of things to make fun of Mr Engle about than there are about me.

In response to his defeat, Mr. Engle said, “There is no way I lost to Savage. I’m so down right now. I have nothing else to say about that man.”

However, while Mr. Savage reigns supreme today, there is always a possibility of a future upset. Until then, even with the battle concluded, their rivalry will always simmer under the surface, waiting for the day it can erupt once more.

One Response to “The Ultimate Showdown of Ultimate Destiny: Mr. James Engle and Mr. David Savage face off in a diss match”