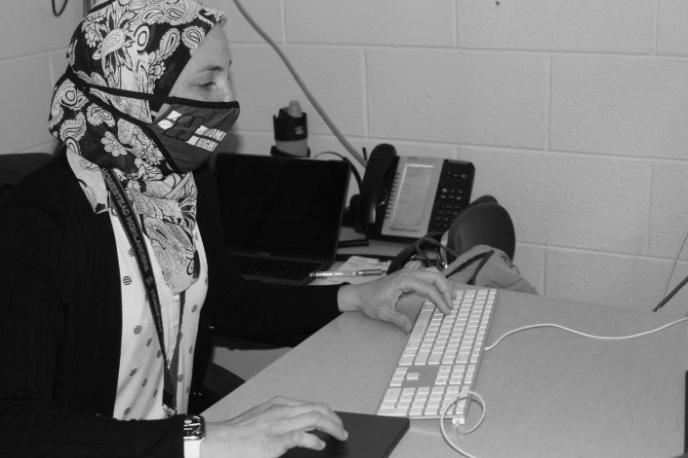 As someone who chose to pursue her dreams of studying computer science despite the lack of female representation available, Manal Roumani has been a source of inspiration to dozens of promising young students who have wanted to follow their dreams but felt like they couldn’t given the fact that others like them hadn’t done it before. With smiling eyes, Roumani stands proudly in front of a poster displaying prominent women in engineering and mathematics in history, proud of how she works hard every day to be part of this historical movement. “One of the most important things a young woman can do while she is on the pathway towards her dreams is to be kind and have a positive impact on the people around her to help uplift the world.” Roumani said.

Despite the surge of women entering STEM professionally in recent history in comparison to past generations, an immense gender divide remains in the world of technology today. The information age has been a time of tremendous revolution for applied sciences, to the point where about all people directly or indirectly are dependent on the world of computing.
However, as with the countless revolutions in prior human history, more women remain on the sidelines of the field- especially those in less developed areas. A report by the United Nations Education and Scientific Cultural Organization has cracked down on what this implies from a global level; “most of the 3.9 billion people in the world who are offline are women; in the developing world, women’s access to the internet is 25% below that of men,” the report said.
With this in mind, women around the world, including Manal Roumani, computer science teacher, with passions for STEM are continuing to bridge the gap between females and the infinite world of possibilities, opportunities, and growth that can be discovered by opening up a computer. According to Roumani, the increase of diversity that is slowly being incorporated into fields that were previously male-dominated is allowing more chances for advancements in those areas.
“Bringing those differing views, especially with each woman’s individual background, helps us see problems from a variety of angles which in turn helps the solutions to become more encompassing,” she said. Regardless of those who laughed at her resilience, Roumani shares that during college, she was one of only five women that were in her Computer Science graduating class. “The class consisted of about 130 students or so. In the beginning, we would always hear talk of how the “girls” would end up dropping out. However, the beauty of it was that three of us were ranked in the top three in that class,” Roumani explained.
To further progress in the direction of female empowerment, Roumani expresses the criticality of planting the seed of autonomy and self-determination into the minds of girls at a young age, explaining that this will instill within them the aspirations to redefine the words ‘failure’ as ‘learning’ and ‘perfection’ as ‘grit’. Her admiration for her specific interest is due to her love of problem-solving and growth and hatred for stagnation and boredom.
“Being able to teach computer science gives me the ability to pass this love of problem-solving, exploring many different solutions and helping students see that every single one of them has a new perspective which is useful in this field” Roumani said. If she were able to stand and speak to every young person in the world, Roumani shares that she would announce to them that “there is strength in unity. The more we work together and share our differences, the bigger our world of possibilities becomes.”