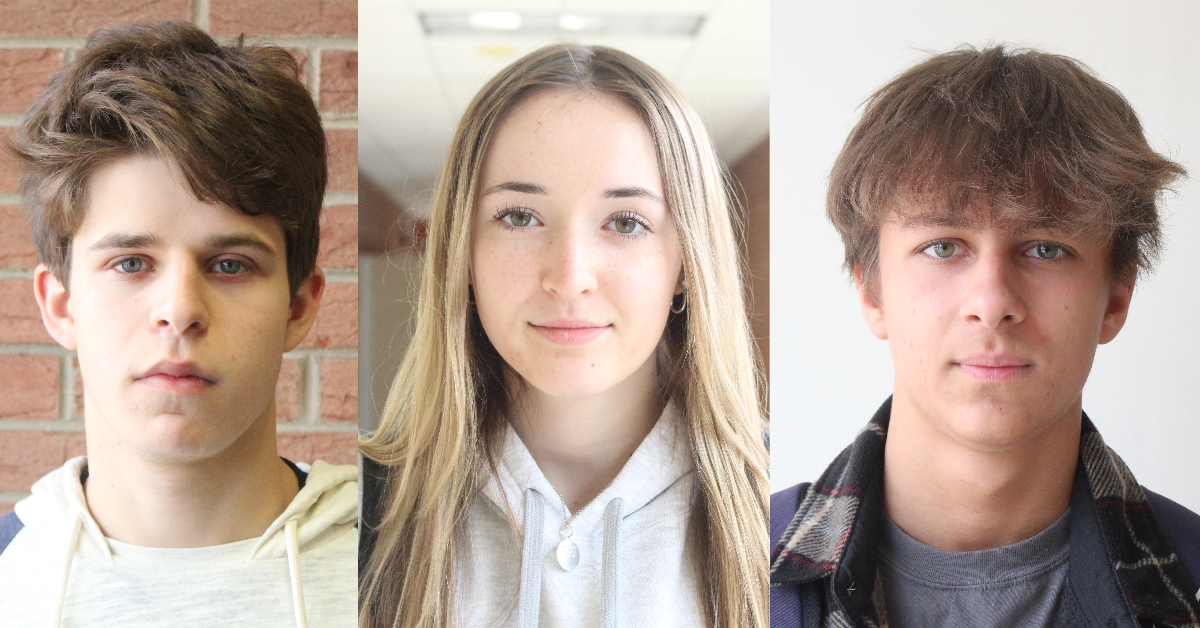 The war in Ukraine weighs heavily on the minds of the Ukrainian and Russian students at Homestead. (Annie Brown)

The war in Ukraine weighs heavily on the minds of the Ukrainian and Russian students at Homestead.

On March 17, Russian artillery destroyed a school in Merefa, Ukraine. Just before dawn, bombs fell on the building, killing 21 people amid the chaos that encroached on the town near Kharkiv.

5,175 miles away, on March 17, Homestead students carried their books down the hallways, gossiped in the lunchroom and filed out the door at 2:37. Both the boys and girls lacrosse teams played games, and the occasional student went to watch, but mostly we just completed our homework, ate our dinners and went to bed.

On March 20, Russian forces bombed an art school in Mariupol. The school had served as a refuge for mostly women, children, and the elderly, and up to 400 people may have died in the attack; the city was in such disarray due to constant shelling that death totals were never estimated.

5,366 miles away, on March 20, Homestead students had just begun Spring Break; we hopped on trains and planes and enjoyed the time off of school. We sunbathed on beaches, skied down mountains, or just vegged out on our couches with an episode of a favorite show.

If, in the midst of our ordinary days, we happened to look at our news feeds or flip on NBC, we would have seen the horrors of war in a far-off place, tales of bombings and shellings of homes and hospitals and, yes, schools. No matter how horrible, though, it was never quite enough to derail the miniature struggles and triumphs that keep us from seeing the world as it truly is.

However, for those Homestead students who could not look away, every bomb dropped, every soldier in the streets, came with a fear far too close to home. Mequon’s population of first, second and third-generation Ukrainian immigrants had not the privilege of returning to normalcy after an invasion so colossal as to shake families more than 5,000 miles apart.

For Oleg Guzei, junior, this reality came about suddenly. Guzei, who moved to the United States from Ukraine when he was seven years old, is considered a “one-and-a-half generation” immigrant, a person who emigrates from his home country as a child.

“I was kind of surprised. I was not expecting it at all,” Guzei said. “I still have family there, so they moved to Poland.”

From the students who were shocked by the invasion of Ukraine by Russian forces on February 24 to those for whom conflict had been a long time coming, the war is on the minds of all with family still in Russia and Ukraine.

Anastasia Raykova, junior, is a first generation immigrant. Her mother grew up in Ukraine, and her family now resides in both Russia and Ukraine, placing them in a complicated situation.

Here, it’s been emotional because we really just feel helpless.”

“Here, it’s been emotional because we really just feel helpless,” Raykova explained. “Right now, all communications between Ukraine and Russia are completely shut off, and some of our relatives don’t have any communications with us, because they’re hiding somewhere and they don’t have internet. So we’ve actually been a kind of median; relatives in Russia or family members of those in Ukraine will contact us, and we just talk back and forth between them.”

Raykova’s cousin, Masha Maksimenko, lives in Kyiv. She has resided in the city for her whole life, and her family opted to stay until eventually it became too dangerous and they were forced to flee to a nearby town.

“(On) 24th February, I understood what the war is,” Maksimenko explained. “It was five a.m. and me and my family heard big explosions. I did not attach any importance to this, but soon my phone was (turning) with news.”

Maksimenko went on to describe the circumstances that led to her family’s escape.

“(During the) first day, I couldn’t sleep. I was laying on my bed dressed in order to leave (the) flat at any moment. I was scrolling down all news,…afraid that I could miss something important. Every air alarm, we ran to shelters with pillows and food. (The) next day, we decided to go to the cottage near Kyiv.”

The reality of Maksimenko’s family is similar to that of millions of Ukrainians, especially those in cities like Bucha, Mariupol, and Kharkiv, which she says face even more dire situations. For their extended families in America, the fear that comes with that distance is debilitating.

Alina Stefura, another first-generation immigrant, graduated from Homestead earlier this year, and the vast majority of her family calls Ukraine home. She even attended school in the country until the fourth grade, and feels strong allegiance to it and its people.

“Ukraine is constantly forced to look over its shoulder, as we are constantly prepared for another round of Russia’s erratic schemes,” Stefura said. “As of recently, our city too was bombed. My uncle and many other patriotic men have volunteered to go on a night patrol for any suspicious person walking on our land. Each night he leaves, we pray that he comes back. I feel (the) continuous guilt of being privileged to live peacefully in the United States while my family suffers back home.”

I feel (the) continuous guilt of being privileged to live peacefully in the United States while my family suffers back home.”

Stefura’s sentiments reflect on the larger issue of Russia-Ukraine relations, a tense-at-best subject that spans over centuries. The Russian Empire strongly opposed Ukrainian nationalism during the 1800s, banning the teaching of its language and the publication of its books. In the 20th century, Ukraine’s fight to eventual independence in 1918 devolved after Wold War I, when the Russian Civil War put an independent Ukraine in jeopardy. Joining the United Socialist Soviet Republic (USSR) in 1922, the nation would not regain state status until the fall of the USSR in 1991.

It could be me, raped, shot and dead, rotting on the streets of Bucha, Mariupol, Kharkiv, Kherson, Chernihiv, just because I’m Ukrainian. Just because Russia, for a lot of centuries, has been trying to appropriate everything Ukrainian, and, for a lot of centuries, we are fighting for our independence. My ancestors died for freedom and the Ukrainian language. Our poets died for Ukraine and their word. They were never silent.”

“It could be me, raped, shot and dead, rotting on the streets of Bucha, Mariupol, Kharkiv, Kherson, Chernihiv, just because I’m Ukrainian,” Maksimenko said. “Just because Russia, for a lot of centuries, has been trying to appropriate everything Ukrainian, and, for a lot of centuries, we are fighting for our independence. My ancestors died for freedom and the Ukrainian language. Our poets died for Ukraine and their word. They were never silent.”

Both Maksimenko and Stefura reject the popular opinion that fault for the war in Ukraine lies singularly with Vladimir Putin, the president of Russia and major aggressor in the invasion. For them, the reality is that the Russian people, just as much as the Russian president, harbor responsibility for what is happening in their country.

However, at Homestead, many Russian-American students, like Ben Usatinsky, a senior and first-generation immigrant, wish to join their voices with their Ukrainian peers in condemnation of the war.

“I have the hardest time trying to understand what they’re going though, because it’s the worst possible circumstance,” Usatinsky said. “The fact is that it’s imperialism in the 21st century, and a completely self-obsessed invasion (for Putin). I have family in Russia that are against what is happening, despite being unable to see so much; Russian culture runs much deeper than what its government shows. The only thing that’s happening in our house is conversation about Ukraine.”

Russian culture runs much deeper than what its government shows.”

Heading into the future, Homestead’s Ukrainian students had similar visions of a free nation.

“Freedom is a right that every country deserves,” Stefura reflected. “Freedom to make its own political decisions. Freedom from the constant worry of any potential unnecessary conflicts… Freedom to finally announce itself as a sovereign country without a doubt. I yearn for peace in my country. Prosperity. And acknowledgement.”

Guzei hopes to see Ukraine joining the North Atlantic Treaty Organization (NATO) for its own protection, and for “some money, maybe, to restore all the buildings that have been destroyed.”

Maksimenko also hopes for a peaceful, prosperous and rebuilt Ukraine one day.
“After war, we have to help Ukraine get back on fit. We’ll work a lot. Ukraine after war is Ukraine with united people, with green fields and Carpathians, with blue sky and sea. Crowded Kyiv and Lviv. A lot of artists, musicians, designers, and photographers who will keep making better our country.”

Ukraine after war is Ukraine with united people, with green fields and Carpathians, with blue sky and sea.”

As for what the world can do now, however, Maksimenko urges us to take action, to do whatever we can to put aside our day-to-day and look the world straight into its horrors, and then to make choices that create real change.

“Just Google ‘Bucha,’ and then another city to look what’s going on. Non-Ukranians have to talk…about that truth. People can also help our army or our brands, ordering Ukrainian clothes, perfumes or jewelery.”

Another prominent way to support Ukraine and its refugees is through monetary and supply donations. Bella Magee, senior, is working with the nonprofit Heart to Heart International to organize a cash donation drive on April 13 and a baby formula drive in room 909/911.

“I started this plan after watching the news one night. I just couldn’t stand what I saw, so I figured we should do something,” Magee said.

On April 8, a Russian missile destroyed the train station of Kramatorsk, Ukraine. The station was filled with refugees attempting escape the fraught region of Donetsk, and the attack left 52 dead and hundreds more injured.

5,326 miles away, during the week of April 11, Homestead students will have classes, tests, sports games and homework. We will wake up early and drive to school, we will gossip in the lunchroom and rehash prom weekend. But we will also do something about the people 5,326 miles away struggling to stay alive in Ukraine, for the people just feet away in our classes struggling to ensure the survival of the people they love. We will not look away, not because we cannot, but because we will not.

Once more, don’t be silent.”

“Once more, don’t be silent,” Maksimenko reminds. “We live in (the) 21st century, we have to talk, we have to scream about Russia’s attack. This war concerns everyone.”