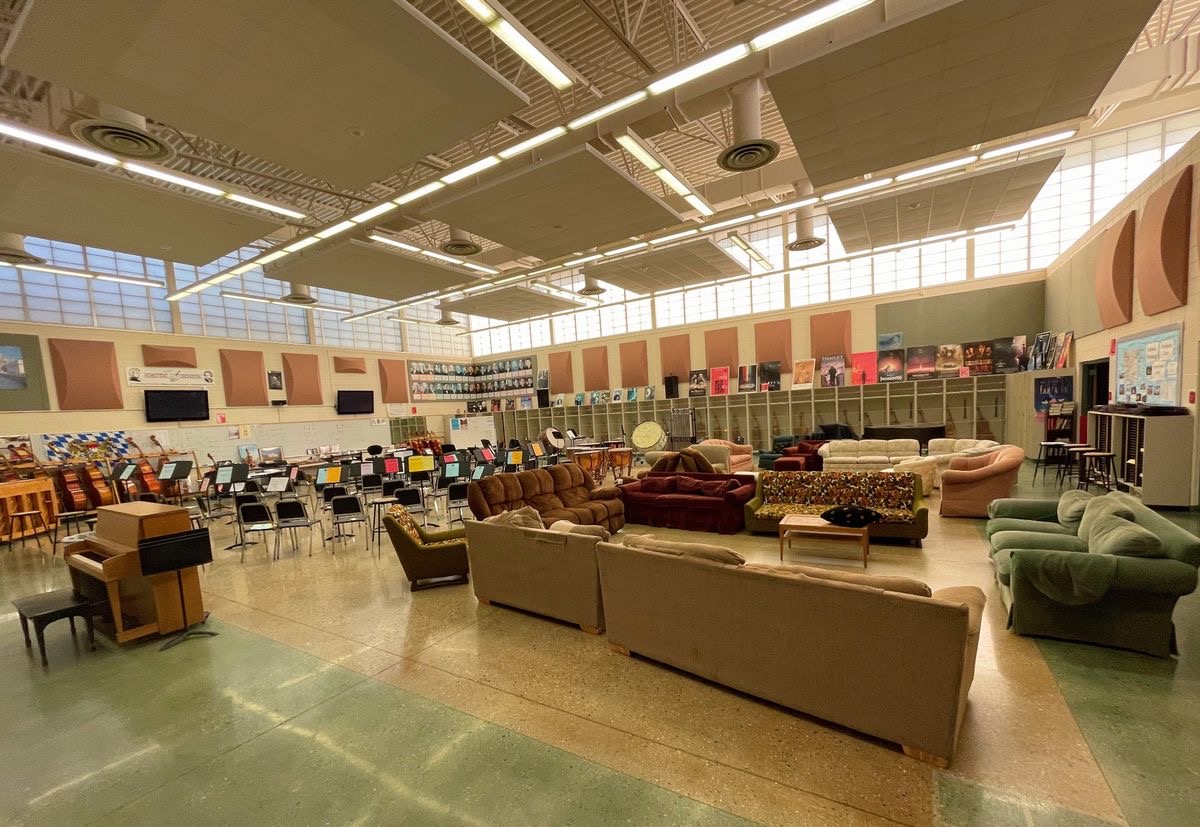 The Music and Me

For years, Homestead High School started and ended for me at Door 12 and the wing that lay behind it. I’d spill out of school buses that were packed tightly with dozens of my classmates and head through the door held open by grinning parent volunteers ready to rehearse.

Inside the 700 wing, I never felt like an imposter, even though the neon orange and green shirts that spelled out “Wilson Elementary School Orchestra” clearly labeled me as one.

I’d go, trudging along with my hands full with my heavy case and cardboard folder and my pink portable stand. My stand partner would walk alongside me with her hands empty and her mouth open, talking about her dog and her 20-something older sisters.

This was one of the many unspoken rules between us: I’d carry, she’d walk, I’d be on the right, she’d be on the left, I’d turn pages, she’d play.

We would both talk, both listen.

After about 45 minutes of playing, we’d pack up our violas and get to the real business of the day: lunch.

Elsa and Anna sang about snowmen on the TVs at the front of the room as we sat on the floor in tight circles, away from the musicians, from the schools. We were comfortable in our microcosms, munching on pizza, sipping on cardboard boxes of grade juice, and talking about everything but the music that was stuffed haphazardly in our folders.

I didn’t notice the life-size cardboard cutout on top of the lockers that lined the room, the vice- 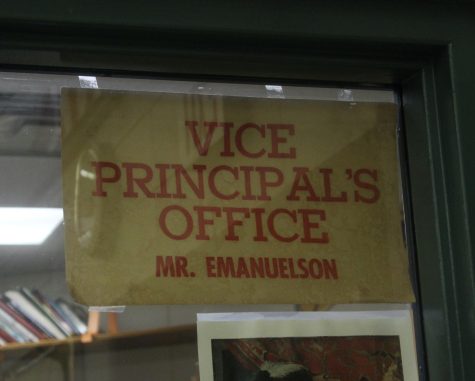 principal sign in the window, the letters on the wall.

The room was only a convenient vessel that hosted my escape from a school 1.5 miles away.

Playing the viola wasn’t something that I began intentionally.

I started orchestra for the same reason that I started most of my activities—because of my older sister—but ironically chose the viola as my instrument because I didn’t want to be too much like her.

I was joined by my neighbor and began my 5-year stint of playing my viola with blissful indifference.

I’d just completed my inaugural trek from the AP Human Geography classroom, and I stroked the white tiled walls as I traveled lower and lower away from the fast-paced bustle of academia that resided above ground and into something deeper.

My freshman year orchestra class was composed of 46 people that at the will of their hearts (or their parents) felt moved to carry their black cases all the way to high school and make orchestra ⅕ of their schedule.

The days that I spent in string orchestra were a whirlwind because the class was such an equalizing one. Every freshman is required to complete a yearlong sentence there, meaning that dedicated MYSO musicians that practiced weekly with private teachers played just stands away from kids whose instruments never left the safety of their lockers—unless it was winter break. 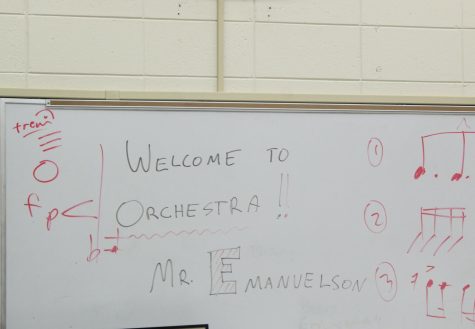 Leading the class was a man that before entering Homestead always seemed more like a mythical legend than an educator to us: Mr. John Emanuelson.

Growing up going to concerts at the high school, we observed from the uncomfortable vantage point of the field house’s bleachers how his wild hair whipped to and fro with passion and would laugh to ourselves at his lack of abandon.

This attitude extended past the man’s conducting. Mr. E steered the class in a unique and unpredictable way that was unlike anything else we’d experienced. There was constantly another reference worth googling, story worth laughing at, quirky stream of syntax worth jotting down in the margins of our music.

On November 14th, 2018, the night of my first high school concert. I was sitting deep within the viola section listening to Mr. E drawl on and on about the program notes and upcoming Noodles and Company fundraising night when I realized that my viola had somehow become out of tune.

We had one song left in the program—a 12-minute Tchaikovsky piece that faintly sounded like happy birthday, and I was terrified of the thought of my tiny sound somehow throwing off the symphonic composition of the group.

Frantically, I passed my instrument to my stand partner to see if she could tune it, but my attempt was unsuccessful. So up my viola went, from stand to stand with the hopes of becoming sonically accurate again, but I was met with nothing but shaking heads until it reached the first stand where the seniors whose bows I’d followed sat.

With a few subtle touches from the first chair musician, my instrument was fixed and sent all the way back to me with soft cheers and warm smiles from my fellow violists that ignited an intense feeling of pride and belonging within me.

From that moment on, the orchestra room and the world that it hosted began to reveal itself to me, bit by bit. 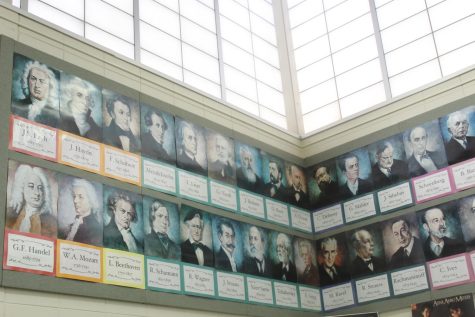 Illustrations of composers backed by rainbow cardboard gazed out at rows of donated pastel couches where we’d sit before class and gaze up at the posters of foreign countries that the orchestra had toured in the past.

Before combined rehearsals with the older orchestras, I would look around the room and marvel at the students that surrounded me. By simply looking from one corner of the room to the next I could spot the school’s student council president, debate star, musical assistant-director, head Model UN delegate, swim team captain, student section leader, and dozens of other people that I admired.

But in that room, shoulder to shoulder, I wasn’t the freshmen and they weren’t the upperclassmen—we were the musicians, joined together with our bows in tandem working to create something special and relishing in the joy that inherently ensued in doing so.

I felt lucky to be in their company.

During that time my love for orchestra bloomed into a fervent one that I cherished deeply. Day in and day out, I would travel down that ramp grazing the white tile on the wall and instinctively let go of anything and everything that weighed me down.

I focused on the life-sized cardboard cutout on top of the lockers, the vice-principal sign in the window, the letters on the wall.

The poster with medieval, candy-colored houses that hung on the whiteboard with the words “Rothenburg Ob Der Tauber” written out above it in bright red marker. 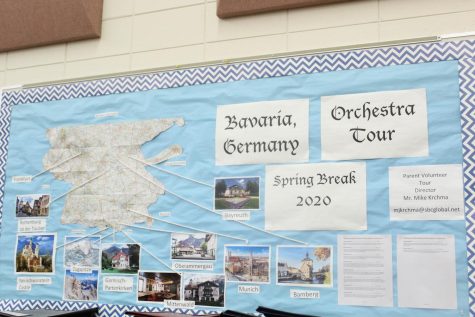 the trip in true Homestead Orchestra fashion: with intensity.

Over the summer of 2019, our first chair cellist arranged a version of the prelude of Richard Wagner’s Die Meistersinger von Nürnberg, a patriotic germanic opera, for us to play. We had “Lunch and Learn” sessions we would meet with our tour guide who gave us rapid-fire German lessons so we knew how to properly say bitte and danke, information on what to bring (and what not to bring) along with us, and important pieces of German history and culture that would benefit us overseas.

We were excited and eager and ready.

So much so, that when a parent asked about COVID-19’s spread across Europe during our February 26th information meeting we remained calm, and when the danger started to feel more eminent during that final week of pre-pandemic classes we joked about us all being quarantined together in Bavaria from the safety of our beloved couches.

Our tour was canceled on March 10, 10 days before we were supposed to leave.

I got the email in my car on the way to a study session for the 2nd-trimester final exams that were set to start the next day and my orchestra group chat instantly lit up with variations “oh god no!” and Snapchat videos of people crying.

Despite the answers I offered in the weekly Google forms that were sent to me that described a healthy practice schedule, my viola remained locked in its case during third trimester.

Orchestra was my first class back in the building after five months away, and when I walked through the doors the sense of familiarity that I yearned to flood my body was muted by something else: shock.

The room had taken on a type of sterile aura that spooked me. Gone were the couches, the ability for stand partnerships, and various other elements that made the space the special place that it had been.

I was no longer an underclassman gazing up at my section from the back row relying on somebody else’s understanding of the music. Now, I sat up in the front row alone, forced to muscle through three-hour classes brainstorming ways that I could grasp at bits of what used to be and what was to create an idea of what could be.

My fellow juniors and I started to bargain with Mr. E to get longer walk and talk breaks during which we would engage with the younger musicians and learn more about who they were outside of their instruments just as those before us had, intentionally taking extra laps to “get lost” in the twisted Homestead Hallways.

Our laughs and groans vibrated in the 700-wing blue bathroom as we changed into tights and slacks in cramped stalls while preparing to film our virtual concerts, during which we would always try—and artfully fail—to get ‘one take’ of us all solidly playing our pieces.

During the sun-kissed 2021 graduation ceremony, we celebrated each of our dearly departed seniors with the childishly melodic sound of our bows hitting the metal rods of our stands and laughed—much to Mr E’s chagrin—as the wind swept our pages of Meistersinger away from our eyes.

The feeling of shock never dissipated, there was no escaping that. But as the year went on its tone shifted away from one of loss, and that was a change that proved the power of orchestra to me once and for all. 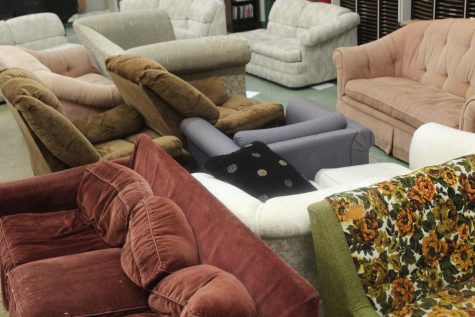 There have been countless days where I’ve traveled down into the depths of the 700 wing with heavy things weighing down upon my shoulders—failed calculus tests, club drama, friendship tension—-but every time I’ve done so, I have experienced the comforting sensation of those stressors relieving themselves from my mind.

After all, it’s hard to be upset when you’re cha-cha-chaing along with dozens of your peers, playing music from sweeping soundtracks, and working with a teacher who’s leading you with the enduring zest of somebody that really loves what they do.

When the clock strikes 2:37 and marks the end of my final day of high school on June 7, my viola will probably still be nestled on my shoulder and the sound of the bell will be interrupting that of Edward Elgar or Ernest Bloch.

I will walk back to the pink couch, the same one that my former stand partner and I sat on freshman year and slowly pack up my viola one last time.

As I go to leave, I will look around the room and remember.

I’ll remember running in the snow from the Trinity Pub downtown to go see the Milwaukee Symphony play.

I’ll remember the lights of the James Barr Auditorium.

I’ll remember the mouse we caught that first Friday of Sophomore year.

I’ll remember the basketball we played before the benefit concert.

I’ll remember the life-sized cardboard cutout on top of the lockers, the vice-principal sign in the window, the letters on the wall.

I’ll remember the magic, and I will take it with me everywhere I go.